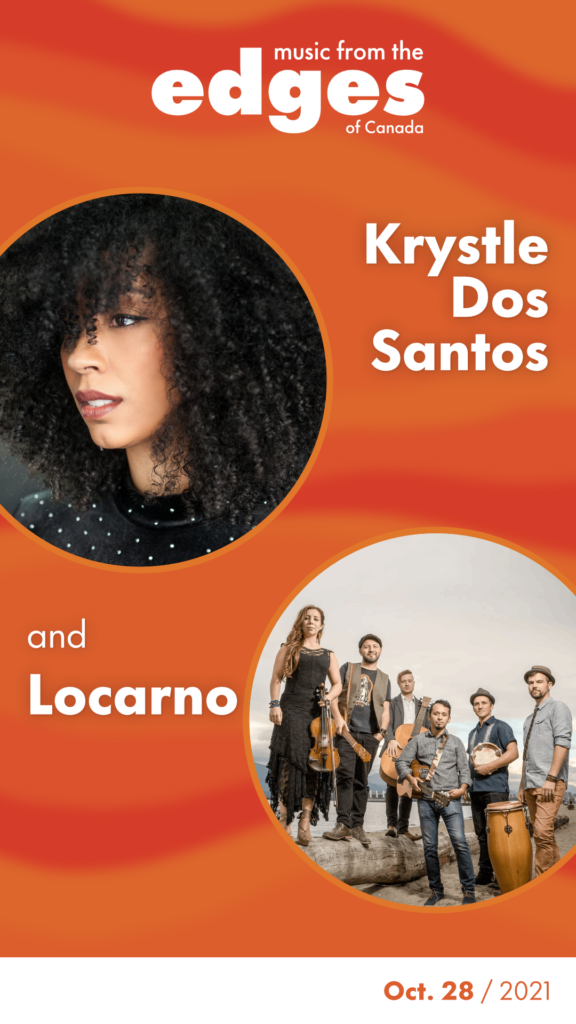 Krystle Dos Santos + Locarno (Music from the Edges of Canada)

The Tidemark Theatre is excited to present Krystle Dos Santos and Locarno, in partnership with Music From the Edges of Canada!

Krystle Dos Santos is an accomplished singer/songwriter and performer. Dos Santos grew up in Edmonton and her roots are Guyanese. Dos Santos released her debut, award winning album in 2008, her second highly sophisticated and elevated album in 2011 titled Fame Fatale and her most recent project BLOOM|BURN which awarded her the WCMA for R&B artist of the year in 2020.

From singing on stage with Stevie Wonder to performances in Dreamgirls (2013), Chelsea Hotel (2018), and on stages all around North America. With her original theatre productions BLAK, Hey Viola!, and a Motown School show for kids, Dos Santos brings her eclectic style, powerful vocal prowess and magnetic charm to every performance she delivers.

Locarno is the Latin project of JUNO Award-winning musician, Tom Landa. Like him, the music is equal parts Mexican and Canadian. Tom was born and raised in Mexico City and moved to Canada in his teens. In the mid-nineties, he formed the Folk Roots band, The Paperboys, who have been touring worldwide for over 20 years.

In 2006 he was awarded a Canada Council Grant to study traditional Mexican Music in Veracruz, Mexico. Tom spent his days learning the jarana (an 8 string guitar) and learning songs from the Son Jarocho repertoire.  He joined forces with producer Joby Baker (Alex Cuba, Adonis Puentes, Cowboy Junkies) and trumpeter Miguelito Valdes (Omara Portuondo, Afro Cuban All Stars) who helped bring the album to life and in 2010 Locarno released ‘Una Mas Y Ya Nos Vamos’ The music was a mix of Son Jarocho inspired folk tunes with Afro-Cuban rhythms.