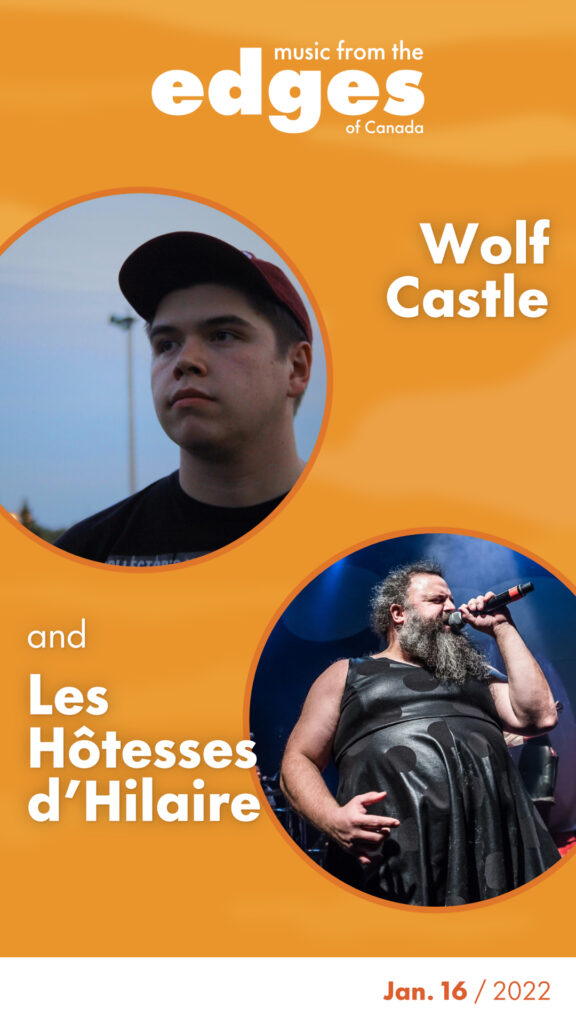 The Tidemark Theatre is excited to present Wolf Castle and Les Hôtesses D’Hilaire, in partnership with Music From the Edges of Canada!

Hailing from Pabineau First Nation in Mi’kma’ki (New Brunswick), the 24-year-old Wolf Castle, aka Tristan Grant, is a true renaissance artist. Gifted with a DIY spirit thanks to being raised on the reservation by a family of artists, musicians, and filmmakers, Grant taught himself to write music and play piano at the age of 11, and has released new projects—written, recorded, and produced mainly by himself—every year since he was 17. As a student of art history and fashion, his spitfire flow and precise production are as carefully constructed as haute couture, and every bespoke beat, rhyme, and hook has the flourish of a master craftsman, stitched together under the House of Wolf Castle. “Heart on my sleeve,” he declares. “Wear it as a war bonnet.”

Les Hôtesses d’Hilaire, a multi-awards winning Acadian band hails from New Brunswick. With their groovy psychedelic-influenced rock, the band is known for giving a great show with a bigger-than-nature frontman.

Les Hôtesses d’Hilaire has performed well over 750 shows over the years. They have zigzagged all over Canada, from the Pacific to the Artic, and living on the Atlantic coast. They have recorded six critically acclaimed albums and are presently working on a new project.

Talking about projects, they wrote and produced a rock opera that played to sold-out audiences in the province of Quebec and New Brunswick. Two albums, one studio and one live, were issued from this endeavour.